Releases: FOR †HE VIRGIN MARY, Terrorist

After some long and quiet time here we are proud and happy to announce three new releases:

This release came as spontaneous as could be, with a show at Boiling Point somewhere in N Miami, where the surroundings resembled Orlando. Being a solo project of guitarist-bassist-vocalist Bootsie Castillo, on the night itself, it transformed into a 3 piece band with Robert King on drums and Juan on bass. The result was outstanding. Check out our NoWorkTube Channel for their first live performance as a band.

The idea of this release it's simple. I came up with two bootlegs releases, asked Robert King's help, who was more than prompt and excited and we decided that they'll be 25 tapes each. Now, purchasing 100 tapes from NAC we had 50 spare. I believe I saw F†VM in Churchill's performing on the floor, maybe it was at International Noise Conference, maybe it was for the first time, not sure, the sound was trippy dreamy, had a rhythm, you could dance to it, cry and laugh also. After a while I messaged Robert to use those tapes for Bootsie's F†VM  and voila.

Listen to the tunes here http://forthevirginmary.bandcamp.com/album/even-sain-s-sin and if you wanna pick a tape up, go to Store or if you're in Miami just write us a message and we'll figure something out. Tape includes lyrics, an interview with F†VM and a patch.

The first time I approached Terrorist for a collaboration was in early January 2013, they had a few songs ready, and the first aim was to release something by Capitalism Casualties show in Lil Haiti, beginning of February 2013. Of course plan failed but the band was able to record a 4 track CDr and I got them some patches made by Joe from Panzram who has a screen printing place (also runs Seven Inches To Freedom zine), got cheap and great looking pins through Steve Pizzarecords, that the band handed out for free through the audience. Success.

More songs were written, shows played and meanwhile the mixing process done by Francisco Botero at Studio G in Brooklyn took many moons and suns. And of course no sooner than later, not only the songs were ready, but also the band was about to emerge on their first tour , August 2013, deadline 2 weeks for releasing their cassette.

In collaboration with local 305 label Dying God Records, the Terrorist tape got released in time, everything was handed out like right in the morning of their departure. Tape comes in three colors, red mint, blue and off white with different artwork.

Listen to the tracks here http://terroristfl.bandcamp.com/album/kyriarchy-destroyer, tapes available in Store. 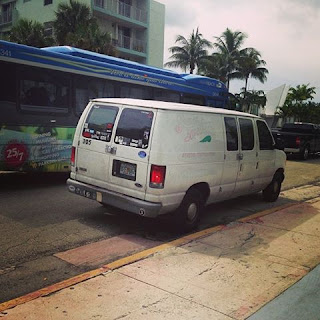 Back in April 2013, with Fucked Ethos from Nashville on tour, Terrorist opened ceremonies at JP's Haus. Only a 2 band afternoon-night, cause of the fucking Meddling Kids :), so everything started in a 305 style laid back indeed with a great session in the kitchen.
Meanwhile, Jeff was hugging, cuddling with his palm tree in the yard.
While still burning, the show erupted marking Robert King's last appearance on guitar among them. The second after the first song started audio recording and the idea of a release from scratch came alive. Very limited tapes available, only 25 made. 305!
Newer Post Older Post Home

Miami 305 based label.
Go Vegan/DIY.
For mailorders, trades or anything else write us a message.
For outside USA, contact us before ordering.
noworkrecords@gmail.com